The Dismissal of the Greek Envoys 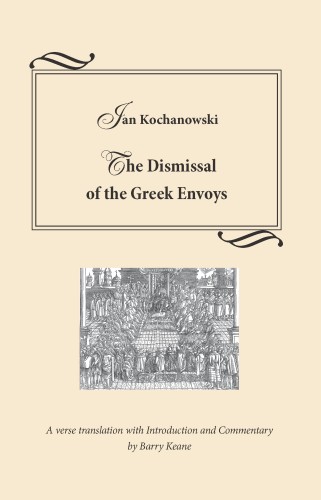 Truly, o King, long expositions are not necessary:
Alexander, while in Greece, a guest in the house
of a nobleman, did not respect the laws of hospitality.
He took the wife of Menelaus and seduced her.
If he had seduced a worthless slave, the host would have taken offence;
but when he took his wife!

The English-speaking world owes a huge debt of gratitude to Barry Keane for introducing us to Kochanowski’s play and poetry. We can now appreciate why Kochanowski is held in such high regard in Poland.

A country that once dominated central Europe, and led the European resistance to Ottoman invasions in the sixteenth and seventeenth centuries, Poland later suffered terrible reversals: it was obliterated in the partitions of the 1790s, and though reconstituted after World War I, brutally occupied by Nazis and Soviets in 1939, the latter occupation lasting fifty years. These horrors are strikingly anticipated in Kochanowski’s play, performed before a royal audience in 1578, recounting an episode from the Trojan War that showcased the failure of political will and wisdom. Kochanowski’s play is a landmark work of Renaissance drama, composed by an author who was both scholar and poet, now splendidly translated by Barry Keane, whose arresting verse highlights the pain, and consequences, of moral breakdown. In the words of Kochanowski’s Ulysses: „O kingdom of anarchy and impending doom, where neither laws govern nor justice is handed down.”