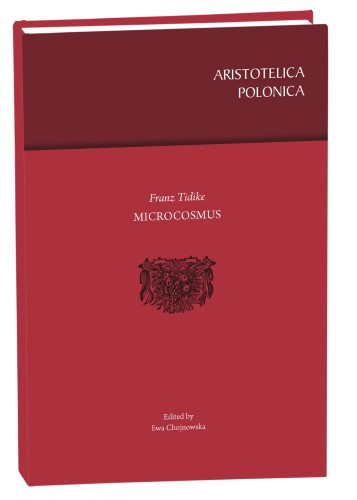 We are proud to present Microcosmus by Franciscus Tidicaeus “describing how the man is a reflection of the unique, boundless, and more than extraordinary wisdom of God the Creator, of all-encompassing nature, rightly called a small world; in a pellucid and truly delightful demonstration it is thoroughly expounded and explained, with many a valuable teaching and lesson of nature, presented in a both articulate and eloquent manner”.

In both major and less prominent schools of the 16th and 17th century Commonwealth, such as Cracow, Gdansk, Vilnius, Torun, Zamość, Raków and many others, philosophy was generally considered the foundation of education. It was primarily identified as familiarity with the heritage of ancient thinkers, Aristotle in particular, while remaining open to various contributions derived from medieval thought as well as Humanism and the Reformation. A sort of koiné of language and conceptual categories has been established, universally understood by the elites of the time, which also represented the diversity of intellectual, cultural and political ideas in the territory of the Polish-Lithuanian state.

The series offers a selection of philosophical texts illustrating the shift from the intellectual culture of the Middle Ages to that of the modern era.